Maker’s Asylum Delhi recently hosted a Maker Spotlight event to showcase some of the projects being worked on by our community as well as exchange stories. Sharing with us his experiences was Tudor Tarlev. Self titled ‘Soviet kid turned world citizen. Full time venture creator and failure master’, Tudor is the Hacker in Residence at Tsinghua University, a public speaker, writer and maker.

We had a line up of speakers talking about projects ranging from assistive technologies and biohacking to interactive electronics and molecular gastronomy. 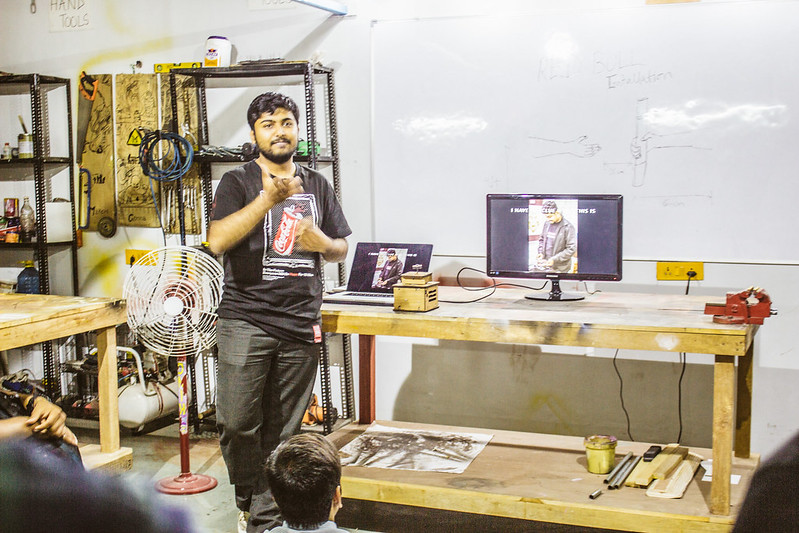 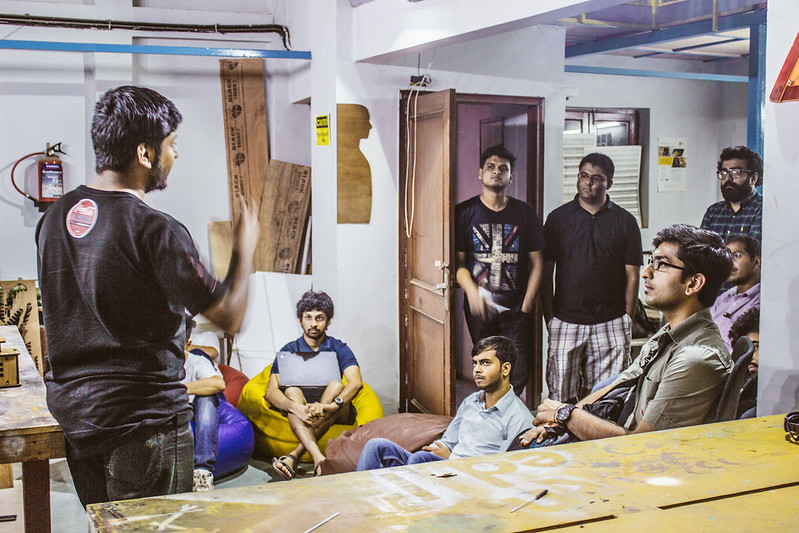 We started with Ujjwal taking us on his journey into hardware development. He’s been working on building a thermocycler at the Asylum for a couple months now. What is admirable is, despite having next to no experience working on hardware projects, he successfully completed his project, and in record time no less.

He struggled along every step of the way, but in true maker fashion, he figured out how to deal with them, and solve them one at a time. From learning how to solder, to sourcing components, to getting components machined on a CNC mill, to writing the code to make it all work – he relied on the internet and the help of fellow makers at the Asylum to build a thermocycler.

Now that we have a thermocycler handy at the Asylum, we’re excited to work on more synthetic biology stuff, given we now have the means to experiment with DNA. 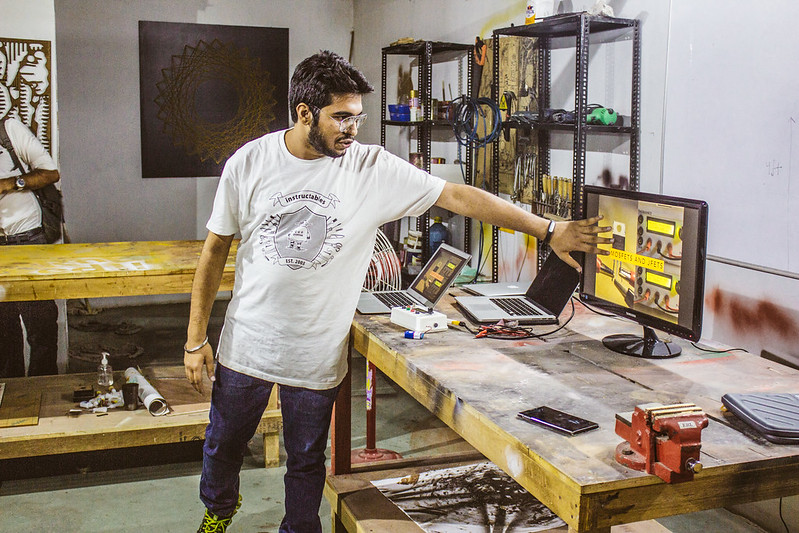 Up next was Akshay, who’s at the Asylum always working on something new involving electronics. During his talk, he focussed on a recently completed project where he built a Component Tester capable of testing multiple types of electronic components, and list their properties. 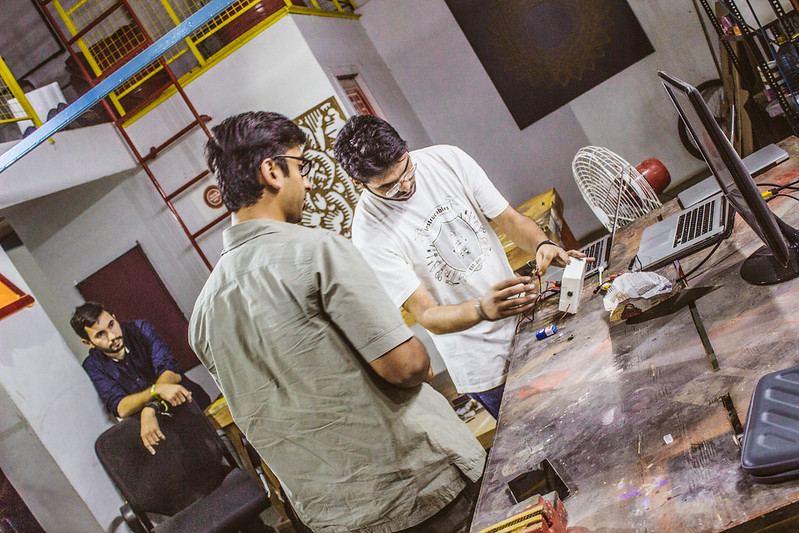 What’s interesting is he documented the entire process start to finish, and published an Instructable, which has gone on to win the weekly awards on the website. 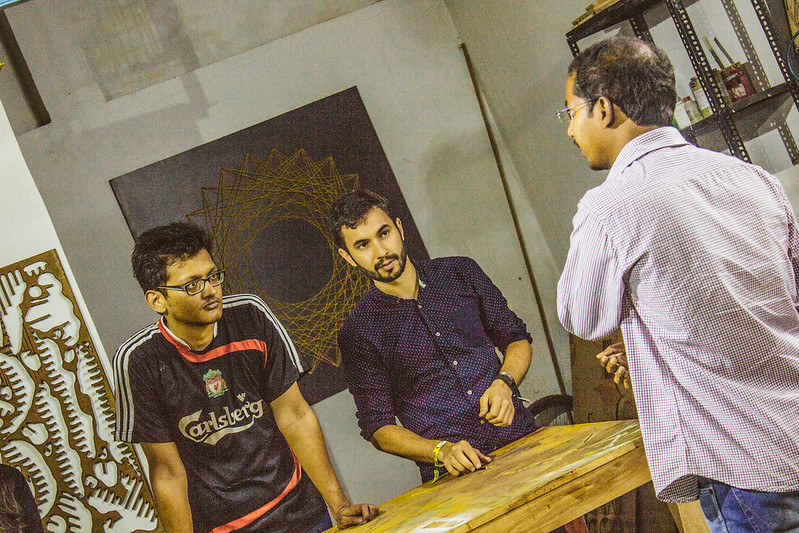 Tudor followed right after, talking about his experiences and his travels. He shared with us the importance of acknowledging the gender gap in the maker culture, and the importance of bridging it, to ensure a gender balanced culture. 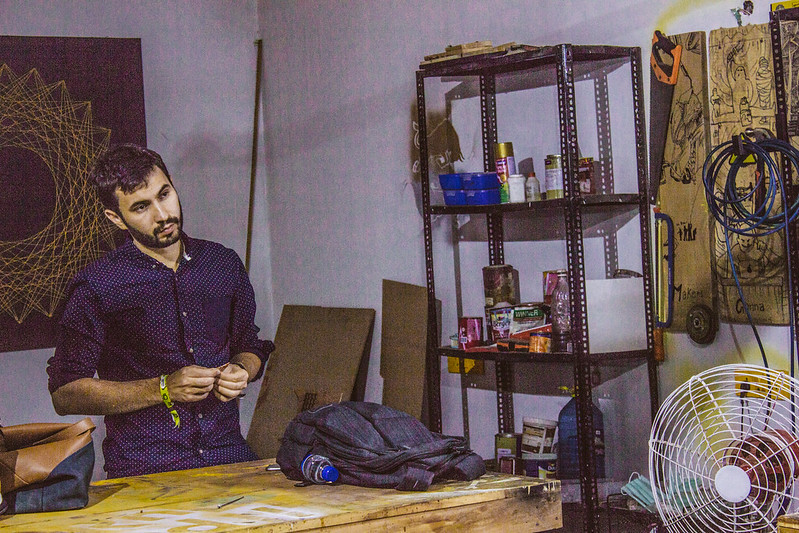 He also spoke at length about the Open Source culture. He pointed out how a lot of makers choose to work on Open Source projects, but do not really contribute to it. He suggested the importance of contributing to open source projects to ensure others can benefit from the work those who came before, and avoid reinventing the wheel. 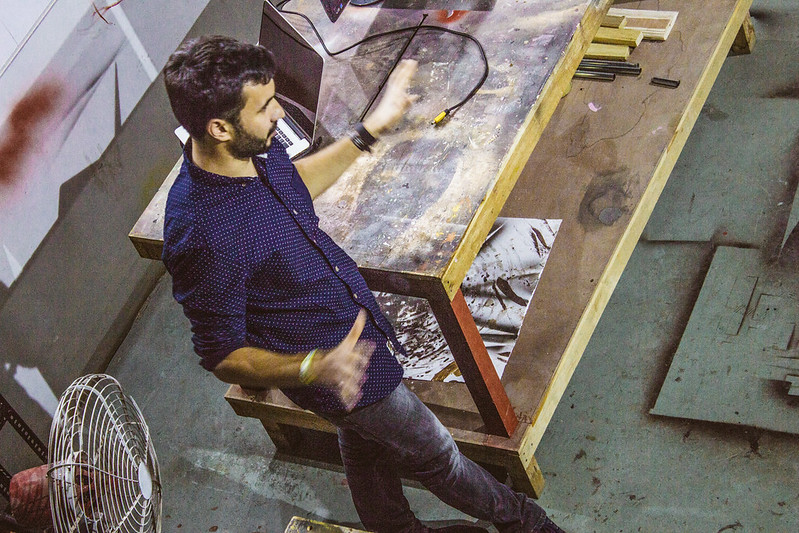 Having travelled extensively and experienced the potential of makerspaces as catalysts of innovation, he shared with us the need to focus on local, context specific problems using the resources available at a makerspace. He also suggested the relevance of makerspaces in the quest for frugal innovation.

Arvind went next and spoke about his project, which he’s in the process of productising currently. Working out of IIT Delhi, he’s been working on developing neuro-controlled robotics projects. He focussed on an augmented reality project he’s currently focussed on, and shared with us the challenges he’s currently facing and how he intends to overcome them. 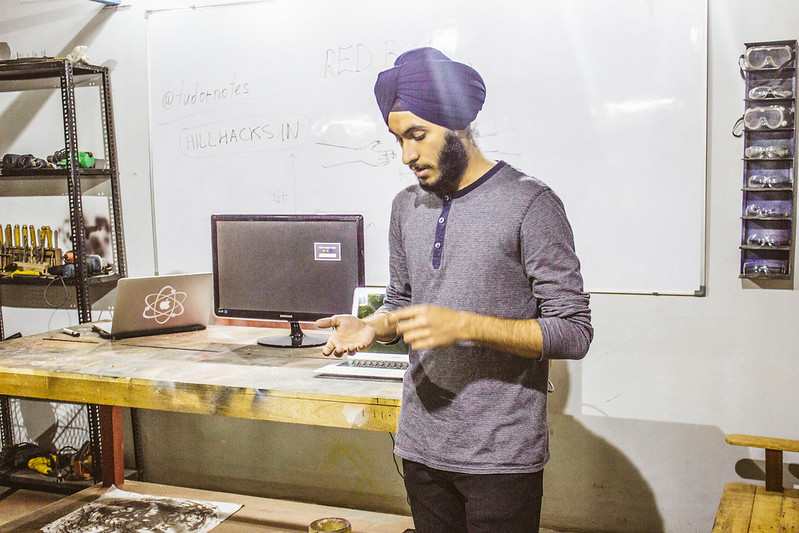 Gursehaj followed right after and spoke at length about the need for frugal solutions to complex accessibility challenges faced by millions of people around the world. He described a project he’s been working on for some time now, that aims to aid people with vision impairments using computer vision and haptic feedback. 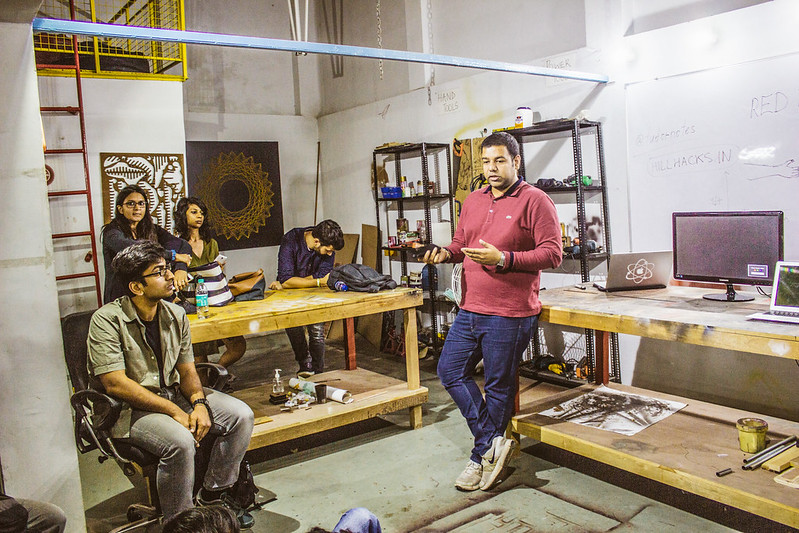 Nikhil went next and spoke about an initiative he’s started at the Asylum in an attempt to bridge talented makers with industry requirements. He’s calling the initiative ‘School’. He intends for it to be an effort to push forth the agenda of project based learning while also providing massive exposure to makers by bringing in industry requirements.

To learn more about the initiative, check: [What is School? – Maker’s Asylum Discussion](https://discuss.makersasylum.com/t/what-is-school/25) 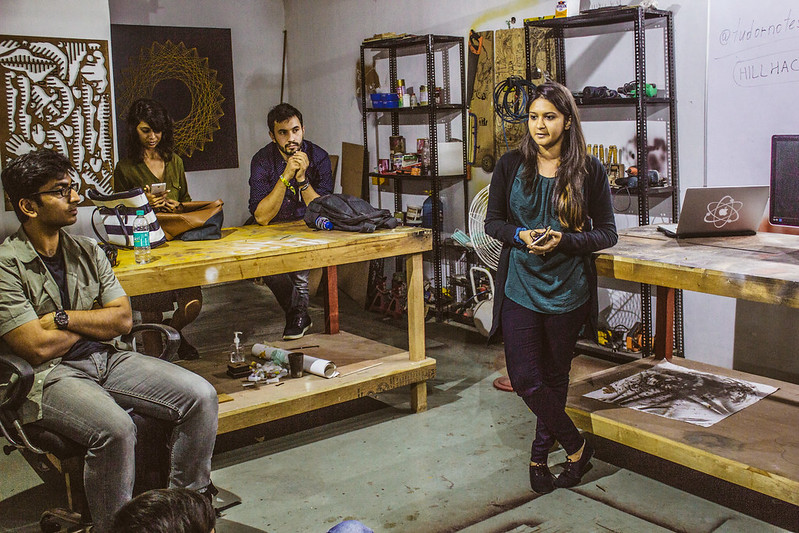 Priyal was the last speaker for the day, and she spoke about her journey towards experimenting with food. She suggested traditional Indian food could be fused with interesting ingredients to make for not just more exciting but healthier alternatives. 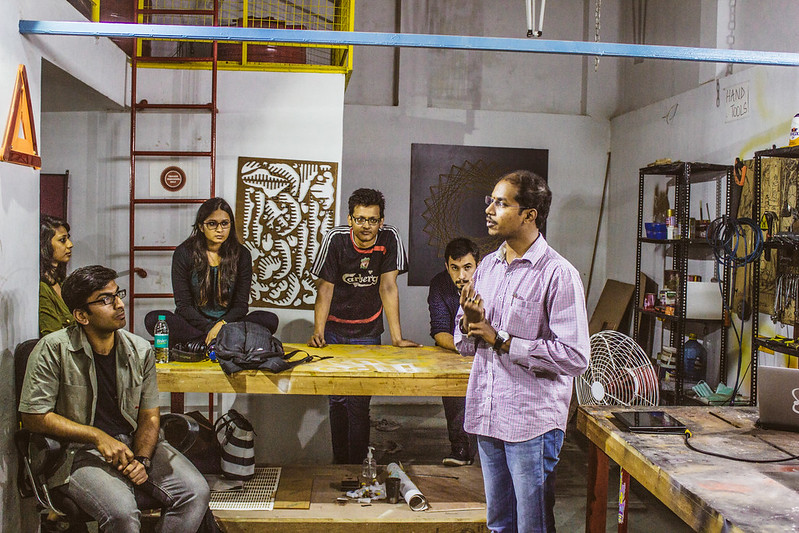 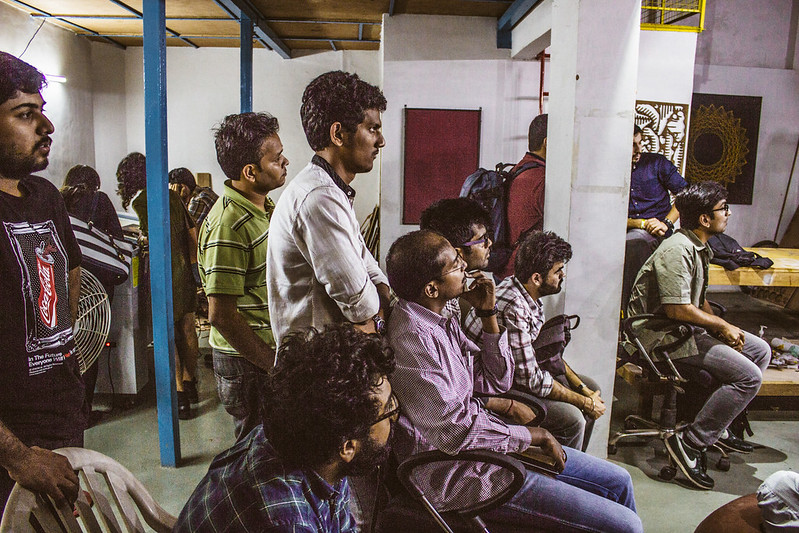 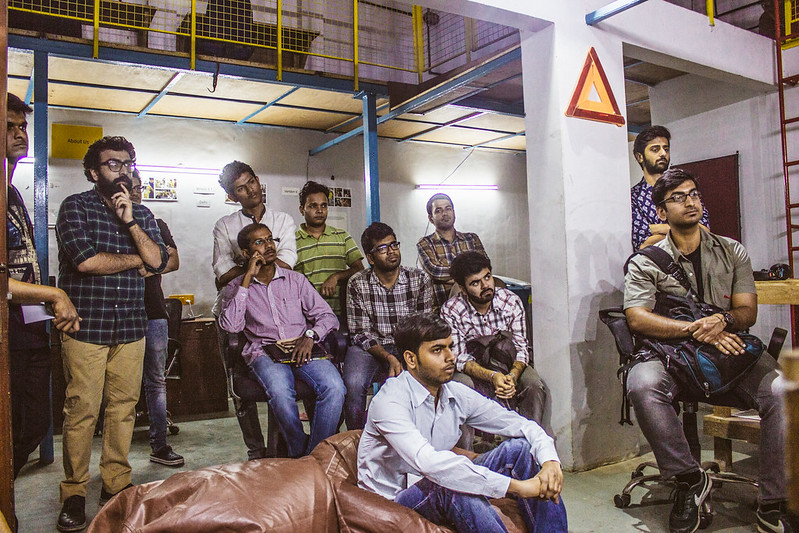 In between the focussed talks, there were others who spoke about everything from interactive installations to conductive ink.

At the Asylum, we have a belief that the best ideas come from a cross-pollination of ideas. The simple act of bringing together people from very different backgrounds and interests in itself is the first step to such exchange of ideas. It was a great evening sharing stories and being inspired.

Till next time, keep making!